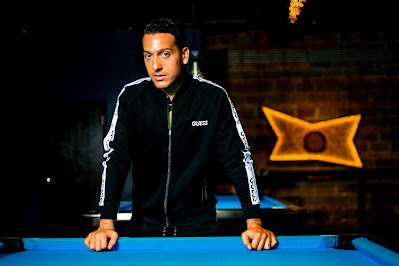 Born in Chicago to immigrant parents, Andre was the middle child out of five. Being brought up in a blended family, being of half Greek and half Salvadorian decent, theatre was in his blood and by age thirteen he was enrolled in Barbizon modeling school. For the next several years, Andre passionately indulged in singing, dancing, and acting lessons.

On July 4th, of 2013 Andre Bellos released his highly anticipated official debut album "Mythology". Mythology produced the hit "Otra Vez" (Tried again) which was the first Spanglish unreleased single from this crossover artist. The song hit the top ten w/in 7 days on local pop charts for Chicago, and in 2015 was re-released with new cover art and renamed, Mythology re-loaded.

Andre spends his free time volunteering on his "Do the right thing" initiative, traveling state to state shedding light on Non-For-profits organizations. Outside of his activism work he has launched an accessory line with up and coming designer Jessica De La Cruz in 2017.

Why do you do what you do?

My purpose is to further the movement for equality for all! My life’s work goes beyond the entertainment business. I am a lover of mankind and a lover of freedom.

What are some projects you are currently working on?

I recently signed on to be an insider for People magazine. I will be helping them shape the publication, adding more stories about “real” people and less about celebrities.

What are your goals for the short-term and long-term?

My goal in the near future would be to continue raising awareness for different non-for-profit organizations across the country. Taking my mission of humanitarian work aboard, internationally. Establishing myself as a philanthropist has always been a life long dream of mine. My independent initiative called “Do the right thing” Has only begun to scratch the surface since starting it in 2017.

Who or what inspires you?

People like Oprah Winfrey, Ellen Degeneres, Steve Harvey, and Tyler Perry are just a few of my inspirations. They are the reason why I wanted to get involved in charity work. They also have broken barriers in the entertainment business and are making real change in the world.

If you could change anything about your industry, what would it be?

If I could change one thing about the entertainment business it would be to see more representation of African Americans, Latinos, Indians, Asians, Transgenders, and those with physical handicaps.

What do you plan to do once you cross the millionaire mark?

My plan once I cross the millionaire mark is to build a school and hospital in El Salvador. This is where my mother is from and their situation is dire in terms of education and health care. I humbly ask you to join me on my quest of life, liberty, and the pursuit of happiness.